Here’s a special guest blog post, by Suzi’s Mom, Marty Miles. Mom helps out on the blog when Suzi is buried under some sort of vegetable, its pumpkins this week.  Marty lives in Northern NY, on the Canadian border half the year, and the other half of the year just outside of Ashland, VA, near Richmond.

Fall is here at the Lake, the leaves are turning color and some places here in the North Country have already had their first frost. Everyone with a garden is scurrying around picking everything that the frost would damage. They are canning, pickling and freezing as much as they can for the winter.

I had lunch with a friend this week. Their beautiful new home is built on the forty acres where Rick’s family has farmed for several generations. I parked out beside the house and came in through their garage, which was full of tomatoes spread out to ripen. They had winter squash of many varieties and a huge pail of acorns saved for the wild turkeys this winter.

We took a tour of their gardens and I was amazed at how many gardens they had and the diversity of the vegetables and fruit that they raise. The field out by the road still had a lot of pumpkins waiting to be picked. I saw sunflowers nodding their heads and some corn that hadn’t been cut. The wild geese or turkeys will enjoy that. There were several apple trees just loaded with apples…some will be preserved for the winter, but there will be some for the deer, too.

I saw a patch of rhubarb, a field of strawberries and Beth mentioned the many quarts raspberries that they picked. I saw a raised bed of lettuce and Beth told me that they keep it mulched and covered from the weather and they will have it well into the winter. They did the same with their carrots, which are quite hearty and will stand a lot of cold weather.

All of their gardens are fenced, which I assume is to keep out the rabbits and deer. There were grape vines growing on many of the fences and Beth told a wonderful story about the wild turkeys jumping to reach the grapes. Some were able to fly up and balance on the wire to feast on them. I wish I had taken my camera, so you could see what a wonderful place they have. I got to take home a bag filled with winter squash, which just happens to be my favorite fall vegetable.

I can remember visiting Suzi’s Auntie Mae Otis on the farm. They always had a huge garden. Mae’s mother-in-law, Elsie Otis, and two of her elderly maiden daughters, Alice and Agnes, lived on the farm as well. All of them were outstanding cooks and there was always some sort of baked goods to be enjoyed when we visited. I have lots of recipes in my cookbook from the Otis’…Date Roll Cookies, Whoopie Pies, (Oh, those Whoopie Pies! They were over two inches thick and were sooo good.), and Alice’s End of the Garden Pickles, which brings me to the Otis recipe for today. These pickles use ten different vegetables from the last of the garden and are some of the best and most colorful pickles you’ll ever eat.

Alice’s End of the Garden Pickles

1. Salt the following vegetables and soak overnight in ½ cup salt and 2 quarts of water.

3. Cover with water and cook together until tender crisp (Watch them carefully so that they don’t overcook. They are going to be cooked some more later on.)

5. Mix all of the vegetables together. 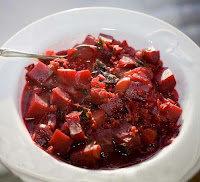 Last week I made some borscht for my granddaughter who has been begging for it. This recipe uses some more of those end-of-the-garden vegetables we have been talking about.

Borscht comes from Eastern European countries where potatoes, cabbage and beets are staples of their diet. Cold borscht is made from young beets chopped, and boiled with their greens. The mixture is cooled and mixed with sour cream, soured milk or yoghurt. Raw chopped radishes and cucumbers are added and it is served chilled with dill or parsley. Sometimes they added hard-boiled chopped eggs. There are many different ways to make hot borscht. Some start with a rich meat base, while others are just made with vegetables. What goes into your borscht depends on the country of origin and what you like.

I found it interesting that in some areas borscht is known as a sour soup. Sometimes it is made from fermented wheat bran and other times it is left to sit several days until it naturally sours. Today we ‘sour’ our soup with the addition of vinegar or lemon juice.

I don’t know the country of origin of this recipe and, although it does call for the juice of a lemon, it is not a sour soup. All I know is that it is easy to make and is wonderfully delicious with a dollop of sour cream on top. This recipe comes from Muriel Blaisdell, a friend who is now teaching at Miami University in Oxford, Ohio.

Cook until vegetables are tender.

Serve with sour cream and yogurt and crusty bread. 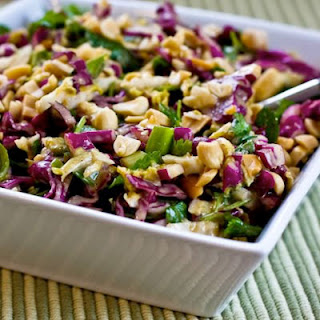 I can’t wait for the fresh cabbage from the garden. A cabbage salad or coleslaw made from new cabbage tastes so much better than those made from the cabbage in the grocery store at other times of the year. I have at least four or five different recipes for salad made from cabbage. This fall I found a new one in a Pillsbury Great Grilling cookbook…you know the ones that they have at the checkout in the grocery stores. Actually I was looking for different recipes for cooking fresh vegetables on the grill when I found this recipe for Asian Cabbage Salad with Peanut Butter Dressing.

You may know of the Asian Cabbage Salad made with toasted Sesame seeds and slivered almonds. You crumble up some chicken flavored Ramen noodles in the salad and use the flavor packet in the dressing. It makes a delicious crunchy salad and if you have never tried it, you can find the recipe online. This salad is very similar, but it has peanuts to go with the Ramen noodles and uses peanut butter in the dressing.

After I made the salad and whipped the dressing together, I looked at the dressing and thought to myself, “This was a big mistake.” But I had gone that far and I put it together. It was wonderful and my family loved it. Here it is for you to try. (note from Suzi: I reminded Mom that ramen noodles are processed food, and we hemmed and hawed, and we decided that since MOST of this salad is fresh, this can be considered a transitional food for those who are making the move to fresh and local. And yes, it is delicious.)

1 (3-oz.) pkg. chicken or oriental-flavor Ramen noodle soup mix (Suzi prefers the Koyo brand, no msg and less sodium = healthier ramen once in a while, but we are still not advocating living on processed food)
2 cups shredded green cabbage
2 cups shredded red cabbage (I didn’t have red cabbage and used all green, but it would look prettier with both)
1 cup shredded carrot
⅓ cup chopped fresh cilantro
⅓ cup sliced green onions
½ cup chopped peanuts (I got my peanuts home and discovered I had honey roasted, so that’s what I put in. I doubt that it matters.)

I hope you enjoy these end of the garden recipes.

Feeding Communities, One Stop At A Time

We distribute seasonal, locally grown produce, meat, and dairy products to families in urban areas and educate people about food security from our retrofitted school (farm)bus!

Our Farmbus is a mobile micro farmers market on wheels that can come to you -- OR you can visit our year-round indoor farmer's market!

Become a member of our CSA!